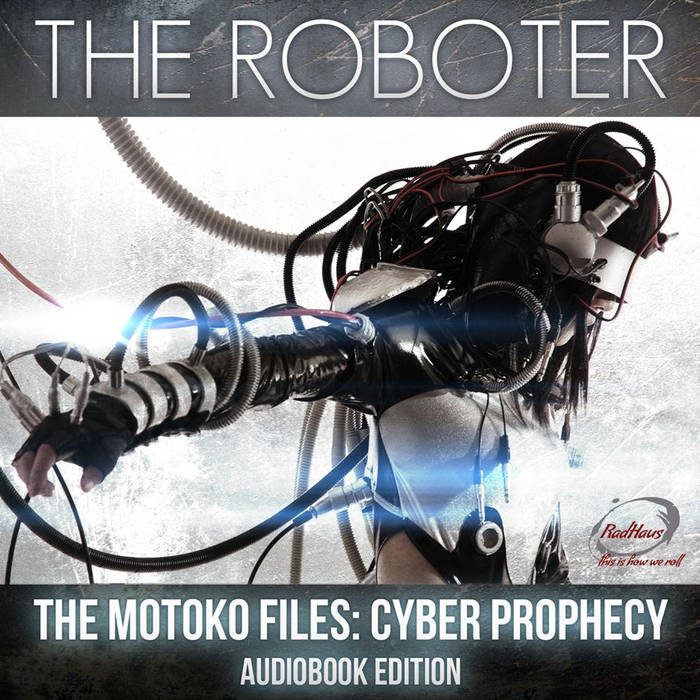 This is a special audiobook edition narrated by Rebekkah Hilgraves.
Inspired by the science-fiction and cyberpunk literary genres, this RadHaus.us special edition album includes the complete narrated audio book with a music soundtrack taken from the album “The Motoko Files: Cyber Prophecy” by The Roboter

Rebekkah produces the "At Water's Edge" radio program every weekend. For more information and to listen online, visit atwatersedge.fm - Rebekkah also works on voice projects for hire - RadHaus.us for more information. Her Bandcamp page is: rebekkahhilgraves.bandcamp.com

Note: The original deluxe edition which includes full music-only tracks and the original audiobook narration by Steven Barber is available separately at theroboter.bandcamp.com ).

This is a short story inspired by such classics as Blade Runner (1), Ghost in The Shell (2), and William Gibson’s cyberpunk novels (3).

Story intro: Motoko is a cyber-cop who wakes up on top of a skyscraper with her cyber brain in shambles as she tries to reconstruct her memories. Who is she? What happened to her?”

The music soundtrack is in a cinematic electronic genre, deeply evocative of the mystery and adventure as it unfolds in the story of a world where technology is integrated into the very core of each human being.

This album contains original content only, music and story. The following references are for illustrative purposes only (any semblances to people, organizations, or places real or imagined outside of the story are purely coincidental) :

(1) Blade Runner is a 1982 film directed by Ridley Scott.
(2) Ghost in The Shell is an original work by Masamune Shirow.
(3) William Ford Gibson is a Canadian author know for his novels in the Cyberpunk genre.

Special thanks to:
- Rebekkah Hilgraves (RadHaus.us) for her wonderful voice narration of the short story. Contact Rebekkah for great voice-over performances and listen to her weekend show "At Waters Edge" (atwatersedge.fm)
- an09 at DeviantArt for sharing her amazing cyborg art photo-element used in the image cover.
- Jean-Luc Charron for final album artwork

For more information and to request a copy of the full short-story, please visit TheRoboter.com
Produced and published by Borders Edge Music - bordersedge.com